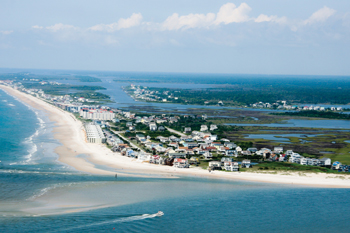 The town of N. Topsail Beach was established in 1990 and is named North Topsail for no other reason than its location at the northern end of Topsail Island. The narrow stretch of land is home to less than 1,000 full time residents. The pristine beaches, beautiful landscapes, and relaxed lifestyle here make this small ocean side town one of the best places on earth to live.

North Topsail Beach is conveniently situated between Wilmington, NC and Jacksonville, NC along Highway 17. With current construction efforts expanding Highway 17, soon metropolitan cities from Virginia to Florida will all be within a short drive of this beautiful barrier island.

While resident populations are low, the summer months bring a huge influx of tourists and revenue to local small businesses. It is not uncommon for summer populations of North Topsail Beach to increase four to five times the normal population size as tourists flock to enjoy the white sands and seasonally warm Atlantic Ocean waters. Topsail is well known for its small town atmosphere and the accompanying peace and quiet not found on some of the more commercialized islands. These are just a few of the reasons that Topsail Island real estate is in such high demand.

According to legend, pirates used to hide in the sound area between Topsail Island and the mainland. When a ship approached the island, the pirates would attack the ship and take its rich cargo for themselves. Eventually, the pirates' secret spread over the Atlantic, and ships approaching the island would look for the ""top sails"" of the otherwise secluded pirate ships. When top sails were visible upon a ship's approach, the ship's crew would prepare for a pirate attack or turn away.

The pirates hiding out in the sound are long-since gone. In their stead are jet skis, swimmers, and fishermen trolling the waters for that next big catch. The area is rich with locally-owned restaurants, eclectic shopping, and a sense of calm unlike any other tourist destination along the Atlantic coast.

North Topsail Beach is located in Onslow County. Visitors to N. Topsail Beach can expect to find quaint little gift boutiques and charming specialty shops nearby, or they can venture north a few miles to Jacksonville, NC. Jacksonville is home to Camp Lejeune and the hustle and bustle of a busy city with all its convenient comforts. To the south, Wilmington, NC has both an eclectic downtown waterfront area (where the USS NC Battleship Memorial is visible) and a faster paced city zone with large retailers and familiar restaurant chains.

Special events are also a huge part of the residential and tourist experience. Every year near the 4th of July, Southport holds the North Carolina 4th of July Festival. Thousands of tourists flock from all directions to take part in the yearly events. Other special events convenient to North Topsail Beach include the NC Spot Festival, the Sneads Ferry Shrimp Festival, Autumn with Topsail, Coastal Carolinas Artists and Crafters Guild and the Marine Corps Celebrity Invitational. There is always something fun planned in and around North Topsail Beach.

North Topsail Beach is at the apex of real estate and commercial growth. Due to the expansion of Highway 17 and new residential development, new businesses are racing to setup shop in the town and surrounding areas.

North Topsail Beach boasts a moderate climate with warm summers and mild winters, making this town the ideal place to retire. Sunrises over the Atlantic and sunsets over the sound side of the island serve as the backdrop for daily living. No wonder many retirees are joining the town's population to settle in and enjoy the beach life about which they've only dreamed until now. Not only does North Topsail Beach offer spectacular views and an idyllic year-round climate, but it also affords residents the chance to enjoy an active retirement with golf courses, metropolitan shopping, and museums, all located just a short drive away. 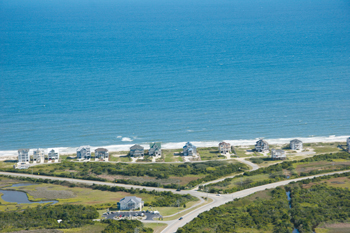 Despite recent growth, real estate in North Topsail Beach remains affordable. Homes start at less than $100,000 for a modest 2 bed / 1 bath located on the island's interior to more than $1.6 million for an oceanfront beach house with panoramic ocean views. Often, new residents choose North Topsail Beach because it offers the best of both worlds. Where else can you buy an affordable island home and enjoy a small town atmosphere less than 30 minutes from a major city?

Don't wait! Call Treasure Realty today and let us help you find the island home of your dreams!