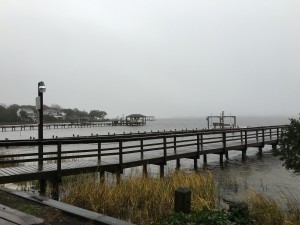 When the groundhog didn’t see his shadow on February 2 in that little town in Pennsylvania, it was broadcast throughout the rest of America that winter would pack its bags early and tiptoe out of here, going out, “as gently as a lamb.” Although I know there’s nothing scientific or logical about the groundhog predicting how long the grip of winter will hold, I secretly rejoiced and believed that old wive’s tale, thinking we had gotten off easily and had enjoyed a mild winter. After all, I’d already seen some daffodils shooting up through the ground in my front yard. 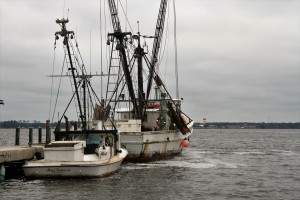 How could I have been so wrong? Almost since then, winter’s been laughing its hoary head off, throwing one coldfront after another toward us, all  coming from the west and joining up with moisture from the south. With them all, I miserably must report, cold, torrential rains have stormed in along with fierce winds that together, have taken their toll on the poor souls of the Topsail Island/Sneads Ferry area.  Winter’s new stronghold has dashed my hopes for an early spring and I fear we’re all at its cold hearted mercy.

So, what do I do when winter is relentless and I feel as if I live in Alaska instead of a rather mild, southern coastal beach town?  I’ll tell you what I do. I wear clothes that feel like pajamas, read spy novels while drinking my Christmas tea from Teavana and I cook hot, steaming meals to chase away the winter blues. 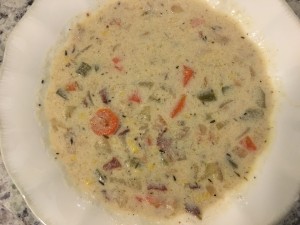 I know I’ve never written a cooking blog, but just so you know, I can come up with some amazing dishes when I’m stuck in the house. The heat from the stove, the  tat-a-tat of driving rain on the kitchen window and the howling gale blowing in from the ocean make me conjure up strange notions and concoctions.

Today I’m a fisherman’s wife from the turn of last century, putting together a chowder in the black kettle over the hot flames in the cottage fireplace. I throw chopped onions, carrots and potatoes into a rich broth saved from some leftover fishbones I saved from breakfast. When they are all tender, I throw in the littleneck clams and put the heavy lid on the pot. After about five minutes, when the clams have had a chance to steam and open, I take off the top and smell the briny goodness. I add a bit of milk to give it a creamy touch and lift the iron pot off the fire, making room for the skillet I use to fry corn cakes. Mmmm…warm chowder and corn cakes. I know Bill will love this supper tonight! I look out the window at the darkening skies, wondering when my husband will get back from the fishing trip. He’s been gone for three days and said he’d be back by sundown today. He didn’t know he would be out on the sea in this storm. I try and calm my worst fear. 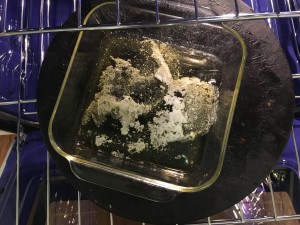 Ok. Wait a minute. Why am I so dramatic? I’ve let my mind go off on a tangent again!  It’s 2016 and I’m no fisherman’s wife. My husband Bill, works at Treasure Realty and I comb the beaches and little towns up and down this southeastern coastline searching for things to write about on the company blog site. Sometimes I wonder what it was really like to eke out a living fishing the brackish New River, the rather shallow Stump Sound and the majestic Atlantic Ocean. The women back in that time had to be physically strong, patient beyond belief and magicians- always creating something glorious from very little! 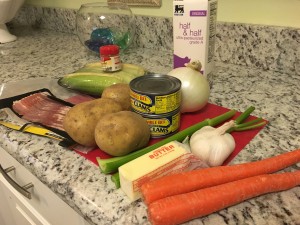 I check my kitchen cabinet. I stocked up for a rainy day last October. I pull out my cans of clams, the bottles of clam juice and check the refrigerator for a carton of Half and Half. As I pull it out I see three fresh ears of corn I bought at Food Lion a few days ago.  That settles it! Clam AND corn chowder! The ladies a hundred years ago could have only clam chowder this time of year. Poor dears!

I gather a few more items and sit down with my computer to find the best clam and corn chowder recipe I can find. There are so many choices but I finally find one that looks yummy. I don’t care what people say about Paula Deen…the woman can cook! I love everything she makes. I find a recipe by her sons, Bobby and Jamie. They learned everything from their mom and often try to put a “healthier spin” on her recipes. http://thedeenbros.com/index.php/recipes/recipe_detail/creamy_clam_and_corn_chowder/ 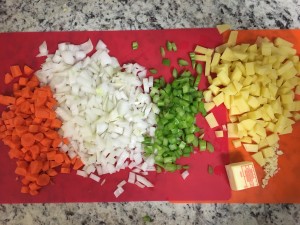 Deciding to go by their recipe, I make a few adjustments also. (I’m never afraid to add my own ideas. My cooking motto is: How can it be bad if everything in it’s good?) I get out my cutting board and begin the process of chopping and dicing the vegetables. Feeling like Chef Donna, I use the new knives Bill gave me for Christmas. I only cut myself once!

The wind blows the rain up against my window and I can hardly see outside. It howls like a wild animal but my furnace sends out its heat with a steady hum. The house fill up with the smell of onion, celery and carrots sweating it out in the bottom of my soup pot. I turn on my Pandora and Frank Sinatra belts out, “You Make Me Feel So Young.” The smell of the mirepoix blends with the music and my heart does a happy dance. I pour the clam juice into the vegetables and add the potatoes and a few spices. It begins to boil and the steam rises. 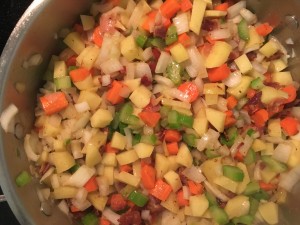 When the potatoes are tender, I add the clams and fresh corn. I have cut the corn off the cob and I know that the yellow/white kernels will stand out as a burst of crispness to offset the tenderness of the potatoes. The clams will be soft, only a bit chewy and the base of the soup will be creamy with the half and half that’s added at the last. I decide that a little hunk of butter in the pot just to smooth things out a bit would be ever so nice.  Who cares about the extra calories when it’s so horrible outside? 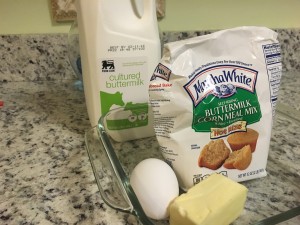 All the recipes I read say to serve with a loaf of crusty bread but I think back to my vision of the fisherman’s wife. She would have had the corn cakes fried to a crisp. I go to my pantry and get out the cornmeal and remember that buttermilk’s in the refrigerator. Mixing those ingredients together, I whisk in an egg, pouring the mixture into a baking pan that’s been heating up in the oven as a stick of butter melts and fills its bottom. I pour the cornbread mixture in and it sizzles as it hits the pan. This is going to be so good!

The cornbread turns a golden brown and I rub the crusty top with more butter. 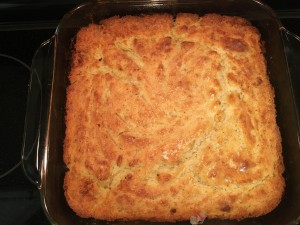 The house smells homey and I hear Bill coming in through the garage. “Boy, can you believe this weather?” he asks as he comes into the kitchen, lifting the lid off the corn and clam chowder.  He picks up a spoon to taste and says, “You should see the next street over. It looks like it’s flooding. I had to go down a different road just to get home. I could have used a boat!”  I pull some bowls down and begin to set the table. I listen to him chatter about some downed limbs in the yard and I think to myself: “I’m really not so different from the fisherman’s wife. I’m just glad he’s home and we’re safe and warm, about to chow down on some awesome eats!”  No wonder they call it “chow”der! 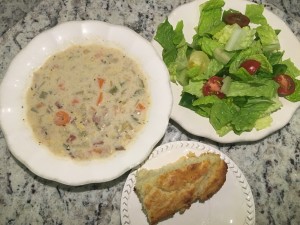 If you have some wonderful comfort dishes you’d like to dish up during the cold weather, share your warm up recipes with us! From our house in the ‘Ferry’ to yours, Bon Appetit!