Cause if you gots the fever, I’ve gots the remedy

I don’t know….It started a few weeks ago.  I’d been fine up until then…But something’s happening to me.  I can’t stop staring out the window.  It’s like, something’s out there and it’s calling me.  Calling my name!  And, I’m hearing things. The ground sounds like it’s rumbling. The trees are buzzing with this high pitched energy noise.  Birds are singing at night.

And my hands…they’re the worst!  I want to dig holes in the dirt and feel it’s grittiness under my fingernails and you know how I hate dirty hands!  I know it’s crazy but I want to put my nose in the loamy earth and inhale the rich essence of something I can’t quite put my finger on. I don’t know… Life?  The essence of life?  I’m  finding myself watching tutorials on bulb planting and the pros of planting with bare roots.  I’m hoarding my money to spend at the dreamiest place ever (Pender Pines Garden Center). Heck, I’ve started walking around Lowes’ garden center like a young girl walking by that new boy’s house, humming to herself while she takes a gander at his bedroom window. But I’m looking at rose bushes!  It’s embarrassing. 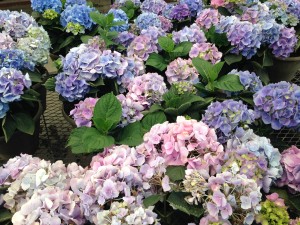 My feet want to break out of the boots I’ve worn since last October and I can’t find my flip flops. The other day, I was sitting on the porch steps in a daze, my eyes closed.  The sun felt so good and warm on my face I peeked open an eye to make sure it wasn’t God or an angel pressing against my face.  It was only the sun, but that’s just it…when I feel this way, I believe anything can happen!  I’m losing my sense of sensibility! I’m getting all dreamy and feeling “spiritual” tingles.  I want to lay down on the ground and hug the earth.  I need help me!  I feel like I’m taking crazy pills!

I was sitting on the bed, propped up with pillows, my computer in my lap, opened to a flower nursery website. Southern Living and Coastal Living magazines were scattered all about the king sized bed. Bill was sitting next to me, my ramblings nothing new to him. It was that time of year again when he knew he had to be careful and gentle with me.  I had suffered these symptoms year after year, usually beginning around the first week of March. He put his cool hand on my warm forehead.  “Honey, I think you’ve got Spring Fever.”

That was the moment when “Dr. Bill” took out his “spring tonic” and began to open the bottle. He knew that one spoonful of his remedy would bring my fever down to a controllable level. He’d developed it over the years and it had a powerful affect on me.  I am usually too delirious to realize the simplicity of his remedy at my time of need.  I gulped it down like a good girl who was promised a fairy tale garden for swallowing the medicine she’d been offered. 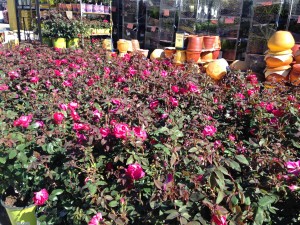 “Donna, what do you want to buy?  How much money are we talking about? I mean, of course, within reason.”  And somehow, these two questions and that part about “reason” cut through my delirium. The tonic worked immediately.  I came back to myself.  It was a miracle.  I didn’t say a word and just stared at him because I wondered how much he was going to let me spend.  I told him my plans and then my bottom line: “I want to fill in my front flower beds with lilies, phlox, liatris and balloon flowers.  I’d like to put some knock out roses in the back yard with some hostas, maybe a few hydrangeas, up by the house.  That’s all.  My guess is that it will cost a few hundred dollars… maybe three?” 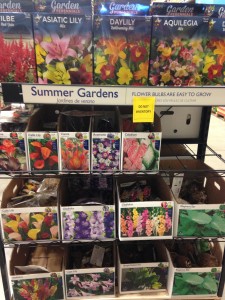 I waited for his answer and he paused, because he knew he had to say “yes” when he was thinking, “no.”  Wisely compromising, he said, “Donna, go out and spend about half that much at first. We’ll worry about the other half later.” My Spring Fever healing had begun.

The next day, feeling eighty percent better but in my right mind, I set off to Lowe’s. Since we had bought a house in southeastern North Carolina in Sneads Ferry, on the mainland across from Topsail Island, I had to study up on what types of flowers would grow in our sandy soil and humid “down east,”  coastal environment.  Going out on a limb and because it was early in the planting season, I bought some summer bulbs and bare root summer flowers.  I read that planting your flower garden with bulbs and roots was cheaper plus the flowers would be stronger because of a better root system. Since I was all for saving money and having strong, big plants, I thought I’d give it a try.  I saw a sign on the side of the bulb display that said, “Dig, Drop, Done.”  Sounded easy enough to me. 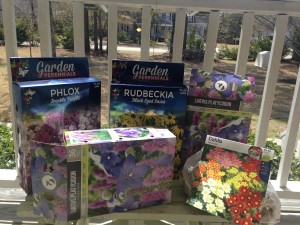 When I arrived at home, I was full of high hopes and the car was filled with bag after bag of rich garden soil and pretty boxes containing the promise of multitudes of colorful summer blossoms. I put on a new pair of garden gloves and went to work.

I began by digging the flower beds and spreading the rich new soil around in them.  May I just make a comment here about how hard that was?  I had forgotten how much elbow grease it took to dig up a garden. I stood back and admired the pretty, clean beds but was so out of breath and shaky that I decided the next day I would place all of the bulbs and roots where they would be planted in my garden and then I’d just do the “drop” part.  The hardest part was over.  Nothing like a hard day’s work! 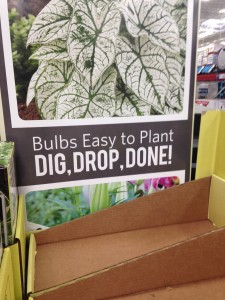 The next morning when I awakened,  I thought the Spring Fever was back in full force but with new symptoms.  My body ached so badly I could hardly get out of bed and it seemed to worsen as the day progressed.  There was a cold rain pelting the black soil on my bare garden and I was hoping the dirt wouldn’t wash away.  I made a pot of chicken soup and stayed inside all day, cursing my body pains and nursing a sinus headache. I would begin the “Drop” part of my gardening whenever my body said it was OK.

Three days later (count them, one, two three,) my body said I could venture out as much as I felt like it. I took all of my boxes of flower “thingy’s” and went outside to my front porch. I’d decided earlier that I would be like a Victorian gardener and write down all of the flowers I’d planted so that later I could look back in my garden journal and remember what was where. Looking down on my scribbled pages, hoping I was going about it the right way, I thought I’d plant them according to their projected heights. I opened my first package.

Liatris and balloon flowers were bulbs.  Easy!  Just which end of the bulb went on top?  Wondering if the bulbs would turn over by themselves if they were planted upside down,  I started digging the holes.  Hole…water…bulb.  Hole…water…bulb.  I squatted.  I sat flat on the dirt.  My back and legs were screaming at me.  Grains of dirt squeezed up under my fingernails even though I had on gloves, yet I toiled on.  Later, admiring my work, I realized after I had dropped the bulbs in and covered them, the ground still looked the same – bare. The bulbs of promise were several inches below the ground getting a feel for their new home. Bending my ear down toward the soil, I listened.  I heard the faint hum of the bulbs, their nervous energy just waiting to start sending roots downward and little shoots upward.  And then, Donna, the Down East gardener,  smiled and said…”It is good.”  I had to take a break to steady my wobbly legs and catch my breath.

It was then time to plant the border flowers: purple freckle phlox and dahlias, the bare root plants.  I took them out of the package and stared at the plastic bag they came in,  moist dirt and roots with some type of nodules hanging on them filled the bag.  Gently, I  pulled one out and honestly, I couldn’t tell if it was the top or the bottom of the plant.  It was so dried and shriveled that I wondered if I should take it back to the store and exchange it for something that looked more “alive.”  “Oh well,” I thought, “I’m just going to put it in the ground and cover it up.  A flower should know what it’s supposed to do.  “Dig. Drop. Done.” Right?

I planted all the bare roots, spacing them as I should,  praying that I was putting them in right side up. Spreading my hands out over the gardens, I asked God to fix any wrong I might have unknowingly done and bless my garden in spite of itself!  Done! I trudged up the porch steps, feeling every groaning muscle in my body.  It’s a known fact:  If you want something beautiful, you have to work hard for it. 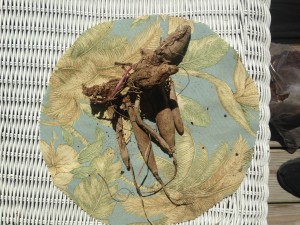 I glanced at the wicker settee and saw several other boxes of plants that I still needed to put in the ground but they were for the back yard.  Those gardens too, would have to be dug up and formed the way I had planned them.  “Dig. Drop. Done,” was starting to seem like an insurmountable task.  I gathered up all the boxes that were left and went into the house, putting them on the dining room table so that they could remind me every time I walked by them, “Hey, look at me!  I need to be planted by the end of March!”

Ugh!  I was filthy, tired and sore. As I ran some hot bath water, I wondered how much I would have had to plant if Bill had given me  all the money I thought I’d needed to plant my flower beds.  I crawled into the tub and thanked God that my husband had “been gentle with me” and only let me get half of what I wanted.  His tonic for treating “Spring Fever” had healed me from head to toe.  Just throw a little money at a project you really want to accomplish and half way through, you’ll lose energy or interest in it. Brilliant! As I begin to clean the dirt from under my fingernails, I wondered if I could come up for a cure for the “March Madness” that seemed to infect him every spring.  I was going to have to think on that one!

Update:  It’s only been four days and already we’ve spotted some of the Asiatic Lilies coming up in one of the beds around our Flowering Plum tree. I guess I planted them right side up after all or God had pity sakes on me!

Remember, Treasure Realty has the immediate remedy for your Spring Fever.  Check our stunning spring getaway homes and prices.  You’ve got a fever, and the only prescription is Topsail Island beach time!

OK little darlings!  Here are three of my favorite artists paying tribute to one of one of my all time “greats,” George Harrison.  Enjoy your song!